A Community of Hospitality

At some point during these next few days, almost all of you will feel lonely. Let me assure you, it is natural, and you will not be alone in that feeling. For some, that mood may persist for part of this year. For others, it may come and go, like the tides of the sea. We all come with different personalities and backgrounds, but all of us long to be part of a college community that gives us a deep sense that we belong. That is our goal here at Wake Forest, and that is the point of my remarks today.

This past June, my wife, Julie, and I were in Amsterdam for a major exhibition of the work of the remarkable 17th century Dutch artist, Rembrandt, marking the 350th anniversary of his death. We were most intrigued by his etchings, many of them tiny and intricate. Particularly striking was the way Rembrandt could convey profound emotions in human faces, whether joy, contentment, sorrow or frustration.

One of Rembrandt’s most famous etchings, permanently held in the National Gallery in Washington, D. C., is that of the patriarch Abraham entertaining three strangers – unexpected visitors who turn out to be angels unawares. Abraham took in these strangers, offered them water to wash their feet, and, with his wife, Sarah, prepared them a lavish meal.

This care and open-handedness to outsiders has made Abraham a powerful symbol of hospitality among Jews, Christians and Muslims. The scene is recounted in both Genesis and the Qur’an. And Abraham and the three guests became a major theme in Western art across the centuries. In Rome today there is a 5th century mosaic about the hospitality of Abraham. Probably the most famous Russian icon of all time, by 15th century painter Alexander Rublev, is titled, “The Hospitality of Abraham,” and depicts the same scene of the three angels partaking of Abraham’s abundance. In the 20th century, the renowned Jewish artist Marc Chagall’s “Abraham and the Three Angels” depicts the same scene.

Abraham has become a paragon of hospitality, of providing to strangers rest, security and the embrace of home. This theme has been carried forward among Catholics who have a liturgy that calls for angels leading “you to the bosom of Abraham” and among African Americans whose spiritual, “Rock-a My Soul in the Bosom of Abraham,” recalls the soothing rhythm of a child safely at home in the arms of a parent. 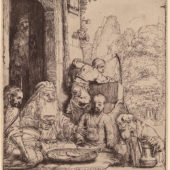 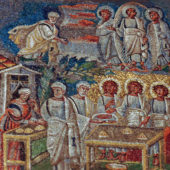 [2] The Hospitality of Abraham

[3] The Trinity or The Hospitality of Abraham 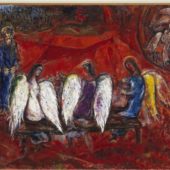 [4] Abraham and the Three Angels

My theme today is hospitality, which for decades has been a hallmark of the Wake Forest campus. Generations of students have found this place generous, inviting and hospitable, with faculty and staff working to make this a home away from home, and students embracing each other with bonds of friendship that in many cases endure for a lifetime. This is a place of high academic standards and expectations, to be sure, but it has also been a place of deep human connection – a community of care where faculty and students can become friends. As a fallible human community, we have never fully realized that ideal, but it is our worthy aspiration.

Over time, the Wake Forest community has widened its embrace to include those it once excluded: African Americans, Latinos, Native Americans and, in recent years, international students from a score of nations from Brazil to England and France, from Ghana to India and China. Where once we drew students principally from the South, today we have students from virtually every region and state within this country. And while we have made progress, we still have much work to do.

This diversity has greatly enriched Wake Forest as a community of scholars and learners. We now have students of many faiths and spiritual beliefs, many ethnic and national traditions, many social and political outlooks, many regional and global homes. We are now open in our embrace of the LGBTQ community. By being free and ready to embrace all people of goodwill, Wake Forest now has the opportunity of providing for you some measure of the diversity of our nation and world, a foretaste of the increasingly diverse and interconnected world that you will face when you leave this place four years from now. Living among your fellow students, in and of itself, is a great educational opportunity.

What do I mean by calling for Wake Forest to be a culture of hospitality? Henri Nouwen has noted that hospitality is too often watered down to mean “soft sweet kindness, tea parties, bland conversation and a general atmosphere of coziness.” But hospitality is not a sentimental affair – or just a clique of friends hanging out together.

No, hospitality, restored to its original depth, the kind for which Abraham is honored, is a more difficult and more costly virtue. Rather than merely socializing with friends, it is reaching out to those who may have no friends, to those who do not feel at home, to those who may feel vulnerable or suspect. Hospitality comes from the same root word from which the word “hospital” comes. It implies a place of safety and refuge for the stranger or person in need. Hospitality means extending welcome to those who, for whatever reason, may feel that they are strangers.

You are important – each one of you – in building this kind of generous community. How you come to treat each other will have a great deal to do with how hospitable you and this community become.

I also think that for two reasons you may find being hospitable more challenging than you might initially think.

First, we live in a time that conspires against genuine hospitality. This is an age of smash-mouth partisanship that some have called a culture of contempt. You have less experience seeing leaders who disagree sit down for thoughtful discussion. Rarely do television pundits discuss an issue as both/and rather than either/or.[5] We see less dialogue and more ranting and raving, attacking and belittling. We see many clinched fists and few open hands.

On this campus, I trust we can sustain and enhance a culture of hospitality. Our broader culture sees too many slurs against blacks and Latinos, against Jews and Muslims, against the LGBTQ community, against immigrants and strangers; and, from different quarters, taunts against those who take either liberal or conservative positions, either political or religious. As we seek to build a community of hospitality, those kinds of attacks have no place here.

The poet Emily Dickinson said, “I know nothing in the world that has as much power as a word.” Words can elevate our moral sentiments and forge solidarity. Jefferson: “All men are created equal.” Lincoln: “With malice toward none, with charity for all.” Langston Hughes: “I, too, sing America.” Martin Luther King Jr.: “I have a dream.” Ronald Reagan: “Mr. Gorbachev, tear down this wall.” Maya Angelou: “But still, like air, I rise.” But words can also wound and humiliate. I ask you to choose your words carefully – in person and on social media, where it only takes a split second to say something that can never be retrieved.

I also encourage you to seek out those with whom you disagree and try to understand where they are coming from. Try to understand before you oppose or denounce. If you are a conservative, try to understand the very best argument from progressives; and if you are a progressive have dinner with a conservative to try to understand why they believe as they do. Take the time to explore with a classmate from China or India or Brazil why and how they had the courage to come to the United States for a formal education. The goal of this campus is to be a mosaic of engaged and abundant hospitality. I invite you to reach beyond the safety and comfort of those whom you would expect to be your friends.

If the shrill nature of our public life is one reason that hospitality may be difficult, a second is the personal challenge you face in figuring out who you are in a new and highly competitive environment. After visiting many campuses, the New York Times columnist Frank Bruni concluded that the biggest problem for college students – particularly in the first year – was loneliness. In a sea of people, too many students find themselves adrift. In coming weeks, you will be making your way in an unfamiliar location where none will feel fully at home – although many will think they are alone in this feeling. Leaving home, many of you completely on your own for first time, you will sometimes feel disoriented. Who would expect otherwise?[6]

At such moments, in this new environment, when you may question how you are fitting in and what your role is to be, let me encourage you to resist the temptation to retreat into what is safe and comfortable. Don’t form your identity only in a narrowly defined subgroup of the like-minded. Instead, be courageous. Raise your sights to think of your neighbor, who probably is having the same experience you are. The surest way to have a friend, Emerson said, is to be one.

In the coming days and weeks, as you begin to find your way around this campus, ask yourself this: Who is the stranger to you? Who seems different or unique, and how can you embrace them and join them to make Wake Forest a home for all? Those strangers might turn out to be angels unawares – guiding souls who can expand your own outlook, offer unexpected friendship, call you into community and open vistas you could never have imagined. How you manifest radical acts of hospitality will help to weave together a community that our world desperately needs – a tapestry of many colors and hues, many textures and patterns.

Wake Forest must be a community that welcomes all people and voices, particularly those who may feel like they are strangers in this place. I invite you, like Abraham, to welcome everyone at the door, greeting them with open-handed generosity, and to move beyond this campus, to make our city, our country and our world places of hospitality. With your help, Wake Forest can more fully become a welcoming home for all.