More on the President’s Home 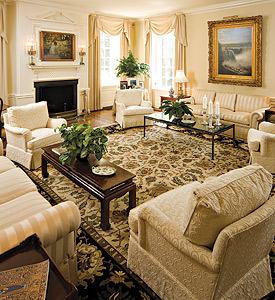 Noted architect Julian Peabody (1881-1935) designed the Hanes house in a traditional Georgian Colonial style. A graduate of Harvard University, Peabody completed his formal education at the influential École des Beaux Arts in Paris. His firm, Peabody, Wilson & Brown, designed numerous houses in the 1910s and ’20s, including more than fifty on Long Island, New York, but only seven in the South: two in Winston-Salem and five in Aiken, South Carolina.

Local African-American brick-maker George Black (1878-1980), who was nationally known for his work, hand-crafted the oversized bricks, two and a half times the normal size, used on the house. Black’s home and brickyard were listed on the National Register of Historic Places in 2000, recognizing his importance to the building trades.

The house was sited so that either face was suitable for the main entrance. Today, the main entrance faces Kearns Avenue while the lakeside façade creates a charming view for visiting guests. The front columns frame a three-story, central section, with a sheltered porch and a Palladian window with a cast-iron balcony grill, flanked by two-story wings on either side.

In the foyer, an antique Russian glass prism chandelier hangs above a curved staircase. The open space under the stairway originally accommodated an Aeolian organ, a popular accessory for homes of the time. The chandelier in the living room once hung in the first President’s House on the Reynolda Campus, built in the 1950s.

Several notable works of art are displayed in the living room. Niagara (c. 1869), by Albert Bierstadt, is one of the premier works in the University’s Simmons Collection. A portrait of British artist Lawrence Alexander Harrison (1910-1915), L.A. Harrison, Esquire, by John Singer Sargent, the foremost American portrait painter of the era, was given to the Wake Forest University Art Collection in 1992 by Anna Hanes Chatham. 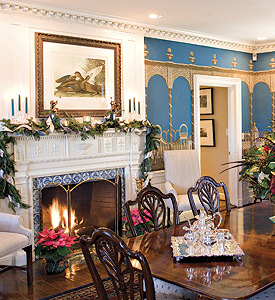 Like other country homes designed by Peabody, the Hanes house was large but comfortable. He filled the home with “designer touches” such as built-in shelves, cupboards, and window seats. Famed interior designer Sister Parish, who decades later collaborated with Jacqueline Kennedy to redecorate the White House, helped design the home’s interior furnishings.

The Haneses entertained frequently, especially to support favorite causes. In the 1940s, Ralph Hanes helped to restore Old Salem and preserve the history and traditions of the area’s Moravian population. He also led an overhaul of the city’s public library and persuaded R.J. Reynolds, Jr., to donate his old family home site for the location of a new library.

Dewitt Hanes actively supported historic preservation and the arts. She served for more than twenty-six years on the board that manages Stratford Hall, General Robert E. Lee’s birthplace, in Virginia. She also encouraged local artists, such as Sam McMillan (1926- ), who first worked for her as a gardener before finding success as a folk artist known as “The Dot Man.” His work has been displayed in the Smithsonian Institute. 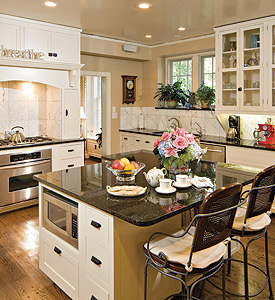 The family kitchen has been extensively renovated since the home belonged to the Hanes family. According to Dewitt’s son Philip, his mother was not a cook. She once told him: “If you learn how to cook, then you will have to.” She did, however, have a green thumb and often used the flower studio, a small room with a deep nickel sink tucked into the side of the kitchen.

Beside the kitchen is a large, comfortable den, originally the Hanes family’s breakfast room. In one corner, a concealed trap door in the antique pine floor lifts to reveal a spiral staircase to the basement and a large safe in which the Haneses stored valuables while away at their summer home in Roaring Gap. The room’s original wallpaper, featuring hand-painted Caribbean scenes on canvas painted in the 1840s, was donated to Old Salem’s Museum of Early Southern Decorative Arts in the 1970s.

In addition to the family kitchen, there is also a large catering kitchen to accommodate the numerous University events held at the house. A three-story “servant” stairwell empties into the short hall between the two kitchens. On the wall beside the stairs is a clock-like mechanism once used to summon servants to various rooms in the house. Upstairs are several bedrooms and bathrooms and the president’s study, originally a sleeping porch. One bathroom features tiles decorated with cartoon animals, a whimsical touch designed by Peabody. A full third-story/attic was once used by Philip Hanes for his electric train set.

Christmas at the Hanes house has always reflected Winston-Salem’s Moravian roots. The Haneses kept a traditional Moravian putz — a detailed miniature nativity scene including elaborate landscaping — at the bottom of the central staircase. Today, holly arrangements and live garland adorn the house during the Christmas season, along with a large Moravian star hung from the Kearns Avenue entry porch. 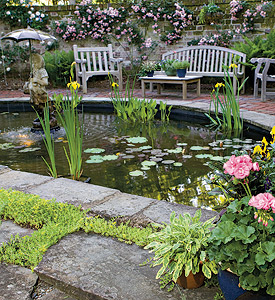 Many of the homes built by Julian Peabody featured gardens designed by Ellen Biddle Shipman (1869-1950), one of America’s first and foremost female landscape artists. Her designs were influenced by her experiences in the American West, imitating the openness and flow of the surrounding landscape. Shipman designed more than six hundred gardens across the nation, twenty-one of them in North Carolina, including the Sarah P. Duke Gardens at Duke University.

Her design for the Hanes garden included some of her signature statements such as the Chippendale gate, dovecote, garden furniture, and walls that afford privacy without compromising the vista or natural setting. The garden was full of greenery and pastel flowers that blossomed in the spring before the Haneses left for Roaring Gap. There was also a greenhouse to grow plants during the winter. The garden, once maintained by seven gardeners, was featured in House and Garden magazine in 1988, a tribute to both Shipman’s excellent design and Dewitt’s love of gardening. A natural spring between Ralph Hanes’ house and Jim Hanes’ house was used to create a small lake between the two brothers’ houses.

In the 1990s, Laura W. Hearn, wife of then-President Thomas K. Hearn, Jr., began a detailed restoration of the garden. Noted landscape architect Chip Calloway of Greensboro, North Carolina, led a multi-year effort to restore the garden. A few original species were not replaced, and several new ones, including hydrangeas and roses, were added.

Despite those few changes, the garden was mostly restored to the formal garden Shipman had intended, and it is one of a handful of Shipman gardens in the nation to undergo such tedious work. Following the restoration, Shipman’s foremost biographer, Judith Tankard, visited the President’s Home to see the restored garden. 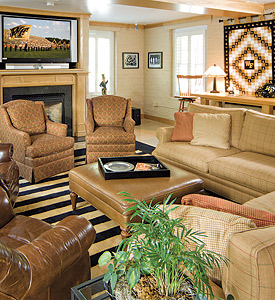 The first official president’s home for Wake Forest was a large stone Tudor Revival-style house built in 1928 near the old campus in Wake Forest, North Carolina. When the new campus was constructed in Winston-Salem in the 1950s, campus architect Jens Larsen planned a modest Georgian colonial home for the president on the edge of campus. That house became the undergraduate admissions office in 1988 following the donation of the Hanes house.

While the interior of the Hanes house was renovated when it became the President’s House, the exterior has remained largely unchanged since 1929. Although it looks original, the Pennsylvania-bluestone patio under the portico on the lake side of the house was added in recent years to provide additional outdoor entertaining space.

The four-car garage near the main house was renovated into a lounge and meeting place for students in 2005, shortly after President and Mrs. Nathan O. Hatch moved into the house. It is a place where students can visit with them in a relaxed environment or meet with extracurricular groups.

For the nearly six decades the house was owned by the Hanes family, it hosted a number of distinguished guests including Lady Bird Johnson, authors Henry Mencken and Aldous Huxley, and noted aviators Charles Lindbergh and Amelia Earhart.

But the most important guests have been the Wake Forest alumni, parents, friends, faculty, and students who have enjoyed the home in the last twenty years and continue to do so today.